According to survey data released on Thursday by the Pew Charitable Trust, eight percent of all Americans who are online use Twitter. However, Computerworld reports that a small percentage of the Twitter population is active on a regular basis. According to the report, only 25 percent of Twitter users responded that they Tweet on a daily basis. 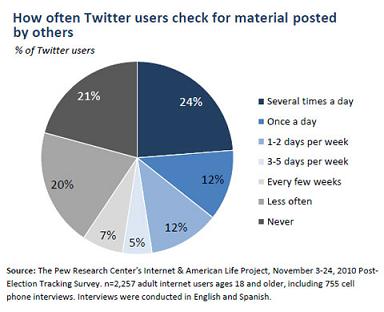 However, the survey results showed that people are much more likely to check their Twitter feeds than actively make posts, as 24 percent of all Twitter users said that they check their feed several times a day, while an additional 12 percent said they check at least once a day.