Moments after Apple announced on Monday that co-founder and chief executive Steven P. Jobs is taking a medical leave of absence, the Twitter community responded with a slew of get well soon messages. According to Web Pro News, Twitter users have been sending messages via the hashtag #getwellsteve. 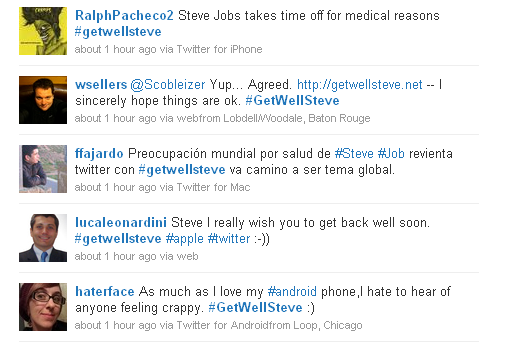 In an email to Apple employees released on Monday, Jobs writes “At my request, the board of directors has granted me a medical leave of absence so I can focus on my health. I will continue as CEO and be involved in major strategic decisions for the company.”

“I love Apple so much and hope to be back as soon as I can. In the meantime, my family and I would deeply appreciate respect for our privacy.”