PROMO Magazine reports that many leading retailers are taking advantage of the new Facebook Deals app to market directly to customers who are already near their stores. Taking advantage of the Facebook Places app for many smartphones, retailers such as Gap, McDonald’s and Macy’s are delivering personalized deals to customers when they “check in” that they are at or near a certain location. 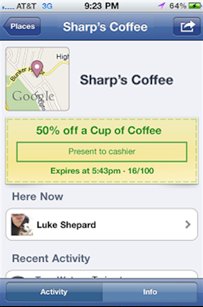 Facebook Places lets users share their locations with friends. Facebook Deals gives them the ability to view deals at nearby businesses through their smartphone and instantly take advantage of the deals without printing out a coupon. For example, Gap stores gave away blue jeans to the first 10,000 customers to take advantage of a Facebook Deals offer, leading to lines forming outside of a New York store by 8 a.m.