The Sun Sentinel reported on Monday that University of Miami football coach Randy Shannon has forced all of his players to close their Twitter accounts. Shannon was concerned that players were losing their focus on practice and games and spending too much time updating their social media sites. The final straw apparently came when quarterback Jacory Harris posted a Twitter update two hours before the team’s 36-24 loss to Ohio State last weekend – game that saw Harris throw four interceptions. 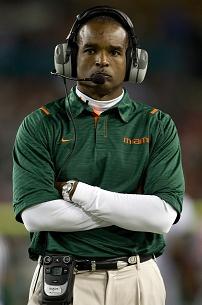 “You see some things and you get kind of hurt, because sometimes it’s your fans that say the things,” Harris said Sunday. “They’re the ones that before the game wrote you some encouraging message. And then after the game tell you that they don’t want a black quarterback here.”

A team spokesperson said that the messages received by Harris had no impact on Shannon’s decision to ban his team from using the social media site.