Singer and actress Courtney Love is being sued for defamation of character by a fashion designer who claims that Love’s “crazy” rants on Twitter caused damaged her reputation and hurt her ability to sell her designs. The New York Daily News reports that as part of a long-running dispute with designer Dawn Simorangkir over $40,000 in clothes, Love vented on her Twitter feed in March 2009 that Simorangkir was  “a criminal who had lost her child in a custody battle and a drug addict” and was a “nasty lying hosebag thief.” 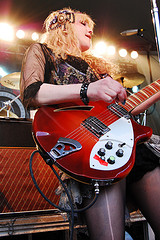 Simorangkir is now fighting back in court. A case is scheduled to beginning next month where she claims that Love’s Tweets damaged the reputation of her Dawn Younger-Smith line of clothing. Legal Blog Watch says that part of Simorangkir’s case will involve calling Alchemist Media founder Jessie Stricchiola as an expert witness in the field of social media. The Hollywood Reports says that Strichhiola will be tasked with “studying how many people saw the Love rants and what kind of credibility is given to statements made on a casual forum like Twitter.”