PC Magazine reports that popular business networking social media site LinkedIn has revamped its site design with a new layout that more closely resembles Twitter. Called LinkedIn Signal, the site redesign was launched to a very limited beta group of 100 new members on Wednesday. The company says that it will roll out to the general public over the coming weeks. 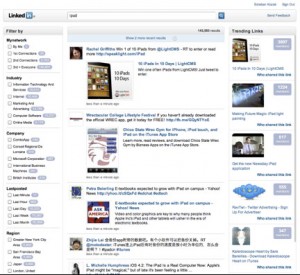 Like with the current layout, LinkedIn Signal shows users the status updates of the people they are connected to. However, this view is more prominent in LinkedIn Signal, which also shows “trending links” that people within the network are most frequently sharing with other users.

“Signal allows you to see everything from and about anyone,” said Esteban Kozak, the principal product manager at LinkedIn. “You can see who is talking about what.”