The practice of “hands-free” cell phone calls is now a common occurrence with many states passing laws outlawing using handsets while driving. But how about hands-free Facebook updates? That could be happening soon, as the Associated Press reports that General Motors is testing a system that would allow people to stay connected through Facebook even when they are stuck in traffic or motoring down the highway. 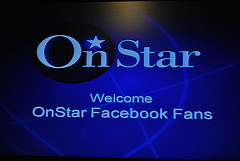 GM is currently testing a software package through its OnStar safety network which would let people update their Facebook pages through voice commands. The system would use voice recognition software to translate spoken words into text which could be instantly updated on a user’s Facebook page. Drivers could also listen to Facebook messages while behind the wheel.

The software package can also translate text messages sent to driver’s cell phones and allow them to reply with one of four automated responses. GM has not said when these innovations could make it in American cars, only that each innovation must be tested to ensure that it doesn’t become a distraction for drivers.