Leading video game company Electronic Arts is making a major splash into the social gaming market as CNET reports that it has launched a Facebook version of its industry-leading Madden video game franchise. Touting it as a “social experience,” EA has launched the Madden NFL Superstars game, which lets Facebook users build teams from more than 1,500 players on all 32 NFL rosters and have them compete in simulated games against their friends. 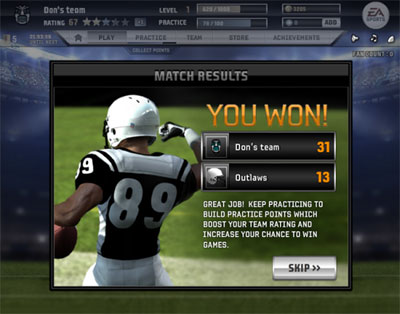 Players are given 10,000 “points” to start out with which they can use to purchase players and build their initial roster. You can improve the performance of your team by logging in for daily “practice” sessions to boost their ability. Games between friends are completely hands-off and totally simulated, meaning that once a game starts you have no control over the performance and strategy of your players. Don’t expect to be calling any 3rd-and-5 plays on Madden NFL Superstars.

When it comes to monetizing the free game, EA has taken the social gaming model popularized by Zynga with their popular Facebook games like FarmVille. You can use a credit card or Facebook “credits” to purchase more in-game points, letting you buy high-caliber players and improve your team instantly.