Are criminals using Facebook to plan their robberies? That was the implication of a report by New Hampshire TV station WMUR, which claimed that police had nabbed home robbery suspects who had targeted up to 50 potential victims they knew were not home because of updates on Facebook and other social media sites. According to the report, the criminals would scan the travel plans of local residents through their social media posts and use this information to plan robberies. 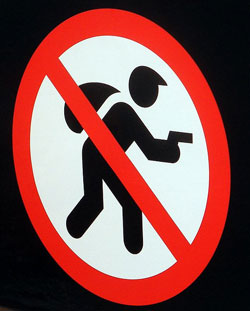 Of course, this assumes that the criminals actually would be able to identify exactly who a person is and where their exact location was based on public information available on social media profiles. That’s implausible for a group that large, a fact pointed out by PC Magazine. According to their story, Facebook is denying involvement in the string of robberies.

“We’ve been in contact with the Nashua police, and they confirmed that they while they have an ongoing investigation and have already made a number of arrests, the only Facebook link was that one of those arrested had a Facebook friend who posted about leaving town in the near future (which is why they believe that home was targeted) and it had nothing to do with Facebook Places,” said a Facebook spokesman in an email interview with CNET.