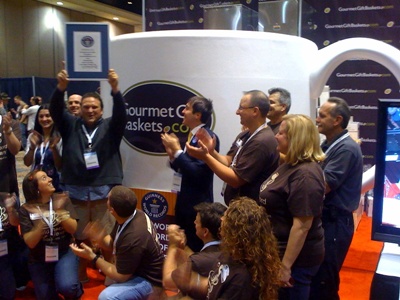 How do you get the most for your promotional dollar? Online gift basket company GourmetGiftBaskets.com is a prime example of how to take an eye-catching stunt and turn it into a long-term tactic to increase publicity and links to their site. I was on hand at Blog World 2010 in Las Vegas when they rolled out the first part of their plan, and I can tell you that it was pretty ingenious.

On October 15, they set a Guinness World Record by brewing the world’s largest cup of coffee. It took eight hours to make the coffee and fill the specially-designed eight-foot by eight-foot cup, but when it was done they had filled a cup with 2,010 gallons of Colombian Arabica coffee provided by the Kerry/X Café of Princeton, MA – the equivalent of 32,160 regular cups of coffee. GourmetGiftBaskets.com shattered the previous record set in 2007 of 911.5 gallons – they more than doubled it!

They then turned around and set a second world record the next day for the largest cup of iced coffee ever made, successfully cooling the coffee to 45 degrees just before the show closed. It was two world records in two days for GourmetGiftBaskets.com. 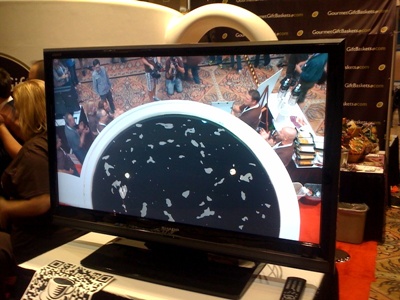 A view from the top of the cup

I was at the show and saw the coffee firsthand, and I can tell you that it was amazing. It really was a feat of modern engineering – it required two 60-amp, 208-volt three-phase power supplies, two directly plumbed water lines providing three gallons per minute and the equivalent of 89,305 times the amount of coffee needed to brew your standard eight ounce cup of coffee. The cup was created for the world record effort by Chisel Productions Inc. of Georgia while the hard, polyurethane cup with a storage tank that served as a foundation was designed by Terracon Corporation of Boston. In order to break the world record, coffee baristas were up at 4 a.m. in order to finish filling the coffee cup by noon.

I spoke to show personal again at the end of the show about plans for the cup. My thought was that with something that big, it might be cheaper to destroy it than to ship it. However, the staff told me that they planned to ship it back to the company’s offices. Perhaps they want to try to break the record another time. 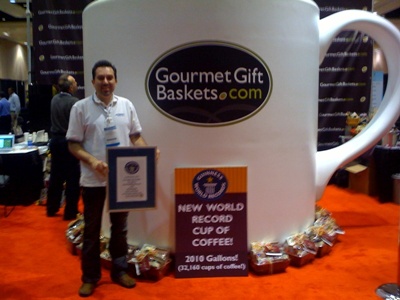 Obviously the main purpose of breaking such records is for publicity. I spoke to some of the booth staff about how much it cost to put on this stunt. They told me that it cost them about $70,000 to build the cup and ship it to the show. It also took them about one and a half months to build the cup and about eight hours to fill the cup with coffee using two high-volume coffee dispensers, which were donated by Bunn-O-Matic of Springfield, IL and produce 225 gallons of coffee per hour. After it was done, they drained the coffee in seven hours.

Since this was done at the show floor, it attracted a lot of attention and was the talk of the show. Logo Loc LTD of New Hampshire handed out t-shirts to commemorate the world record while the California company Marich Confectionary handed out samples of chocolate-covered coffee beans to keep the crowd buzzing. 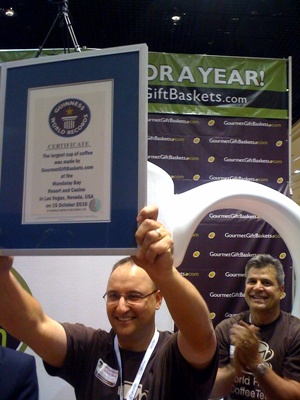 It also was a great PR opportunity and the pictures and videos from the event showed up at blogs and online news sites throughout the world. They were even mentioned on ABC-TV’s “Good Morning America.” It was a great PR stunt no matter how you cut it.

However, GourmetGiftBaskets.com was very smart and found a way to extend the usefulness of the stunt. They’ve put together a contest where they are offering prizes of free gift baskets for bloggers who mention their world record in a blog post. It’s a sneaky way to encourage people to write about the stunt after the fact, along with providing valuable link bait which will help in the site’s overall SEO campaign.

This is a perfect example of how SEO tactics, public relations, marketing and advertising can all work together in a synergistic campaign. By combining different elements, GourmetGiftBaskets.com was able to create a program that extended a one-off event well beyond its original date and maximize its value. It’s something that all companies should consider when putting together marketing campaigns.

At the end of the show, the staff was nice enough to give me and one of our own booth staff two free gift baskets, which you can see in the picture below. 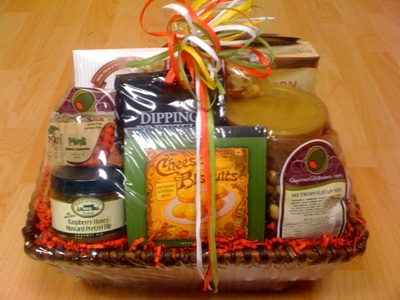